Did you know that for every year extra that you have a menstrual cycle your risk of cardiovascular disease goes down by 2%?1

That means that if you stop having a period at 51 instead of 45, your risk of cardiovascular disease will be 12% lower.

In addition, did you know that a woman’s likelihood of dying from a heart attack post menopause is 60% higher than pre-menopause?2

Why is that, you ask?

It is simple – HORMONES.

Heart disease is the leading cause of death in women, accounting for over a third of all deaths. However, those numbers jump even higher in post-menopausal women, after the age of 55, in women who experience premature onset of menopause (cessation of menses) before 40 years of age, early menopause between 40 and 45 years of age, or surgical menopause (bilateral oophorectomy - where both ovaries have been removed, whether the uterus has been removed or not).3

And it isn’t just an issue of mortality. Cardiovascular disease is also a leading factor in deteriorating quality of life. Strokes, when not lethal, can be debilitating. A weakened heart cannot pump blood efficiently which can lead to decreased oxygen circulation to tissues throughout the body, causing low energy and reduced endurance. Compromised heart health can also impact sexual health and put an end to many activities including recreational sport or exercise, travel, the capacity to play with our children or grandchildren, and many other experiences in our lives that bring us joy.

So how does the loss of hormones impact cardiovascular disease?

Coronary artery disease or atherosclerosis - which is the narrowing of the arteries due to the buildup of plaque, which is caused by fat, cholesterol and calcium, accelerates in the latter part of perimenopause. Arteries are the blood vessels that carry oxygen and nutrients from your heart to the rest of your body, so it is critical they are not closed by plaque and vascular inflammation. The hormone changes due to menopause likely have direct effects on the blood vessels, increasing pro-clotting factors and inflammation, decreasing blood flow, increasing vasoconstriction, and increasing circulating levels of nitric oxide.

Menopause is also associated with increases in heart rate, palpitations, and metabolic syndrome.5 Menopausal women, even when healthy and not obese, have a decrease in carbohydrate tolerance as insulin resistance increases. This is even worse in women who are obese. This insulin resistance is related to the weight gain we see in the majority of menopausal women, adding to the increased risk of heart disease.6

However, interestingly, it isn’t as simple as just adding hormones.

Menopausal women ages 50-59 who begin Hormone Therapy within the first 10 years of menopause do not seem to see an increase in the risk of cardiovascular disease, but women who start hormone therapy at the age of 60 or older (or more than 10 years postmenopausal), will see increased risks including stroke, venous thromboembolism (VTE) and coronary heart disease. This is called the “timing hypothesis” and has been identified as the window for initiating Hormone Therapy in order for the benefits to outweigh the risks of Hormone Therapy in relation to heart health.

The Women’s Health Initiative Study, the largest randomized controlled trial ever done in menopausal women comparing those on HRT and women who didn’t take HRT, showed increases in HDL and reductions in LDL from Hormone Therapy, as would be expected. However, it also saw an increase in triglycerides from oral estrogen, which is thought to be due to the first pass of the oral estrogen that then goes through the liver. Interestingly estrogen given through the skin such as patches or creams did not impact triglycerides.

In contrast to introducing exogenous hormones into a woman’s body, our clinical research on Femmenessence – in both peri and post-menopausal women – gave us some insights into what would happen if a woman’s own hormone status were improved during these stages of life naturally by supporting her own hormone production.

What was most important was that while Femmenessence supported the body’s own production of hormones – such as estrogen and progesterone – when it got to an optimal level based on that woman’s biological age it plateaued off. In addition, as seen in the graph below, estradiol production plateaued off at an optimal level for an early post-menopausal woman, not a premenopausal woman, which ranges up to 400pg/ml. 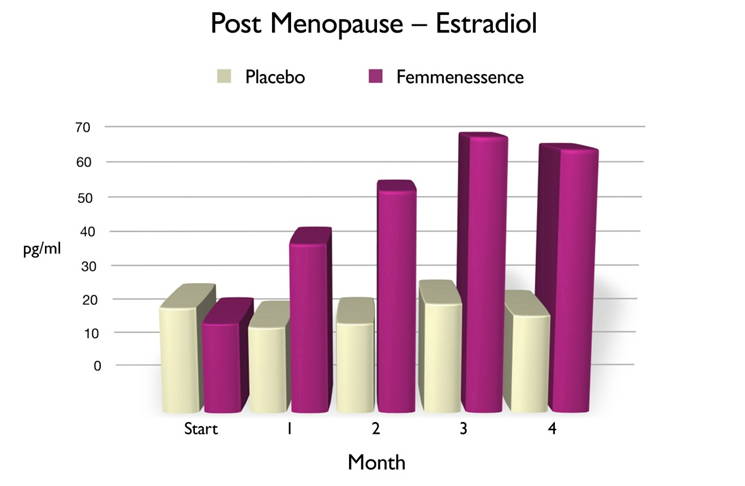 And, Femmenessence didn’t just increase hormone production like estradiol (which directly maintains the elasticity of arteries and blood vessels) and progesterone (which protects arteries from spasms), but the improvement in hormone levels in the body resulted in improvements in several of the cardiovascular health markers that we would hope to see including lipids, blood pressure and body weight. 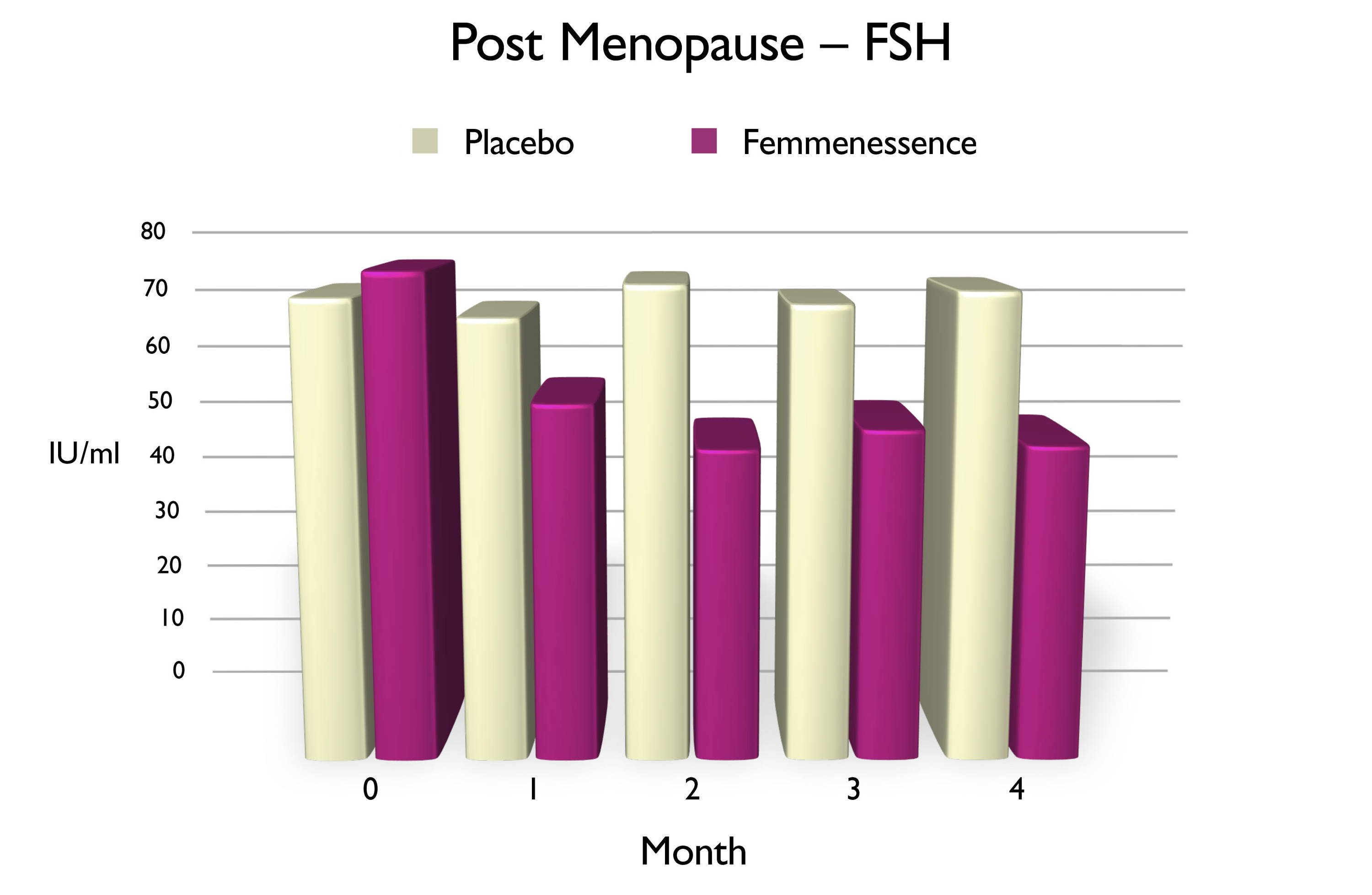 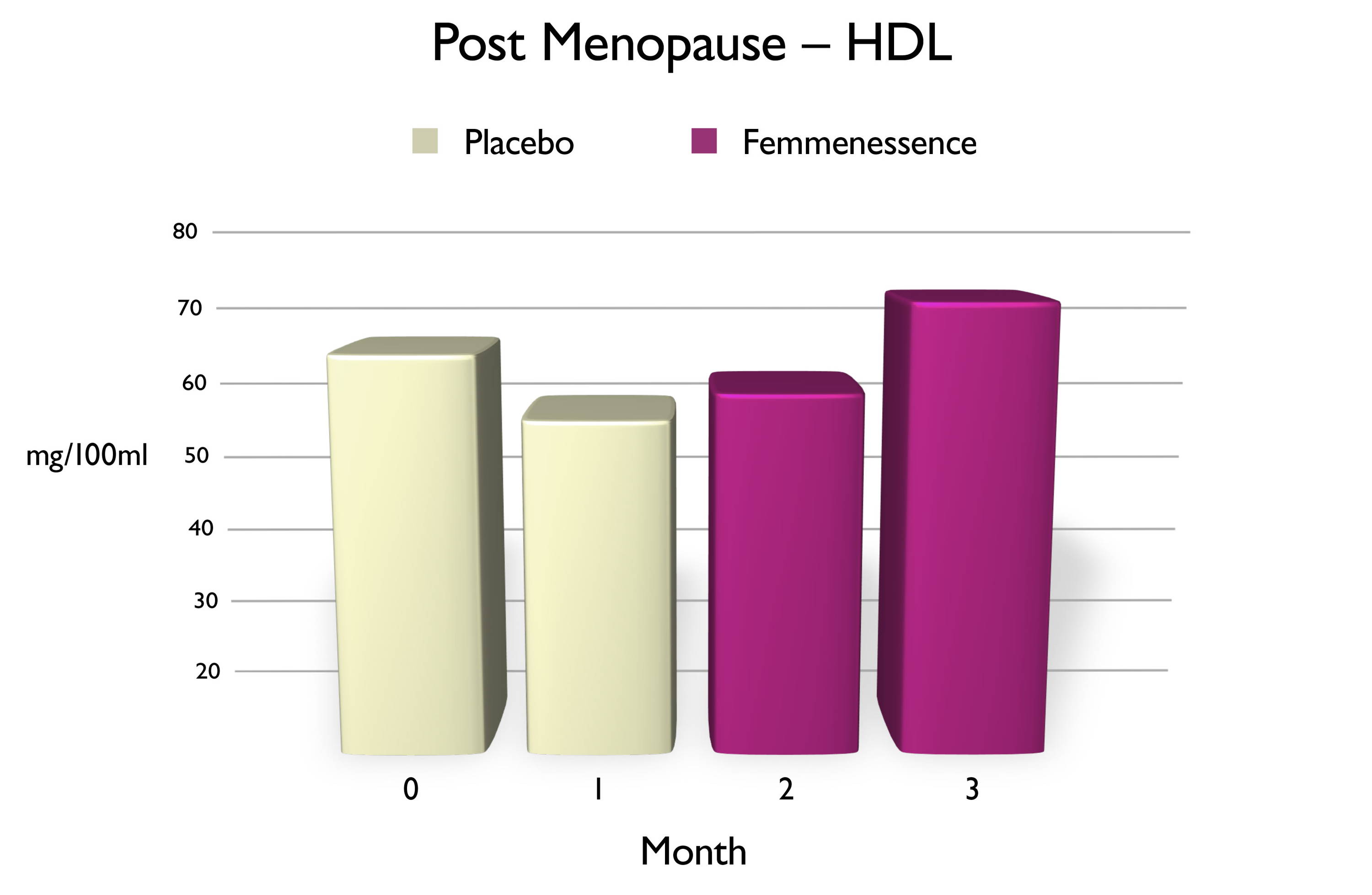 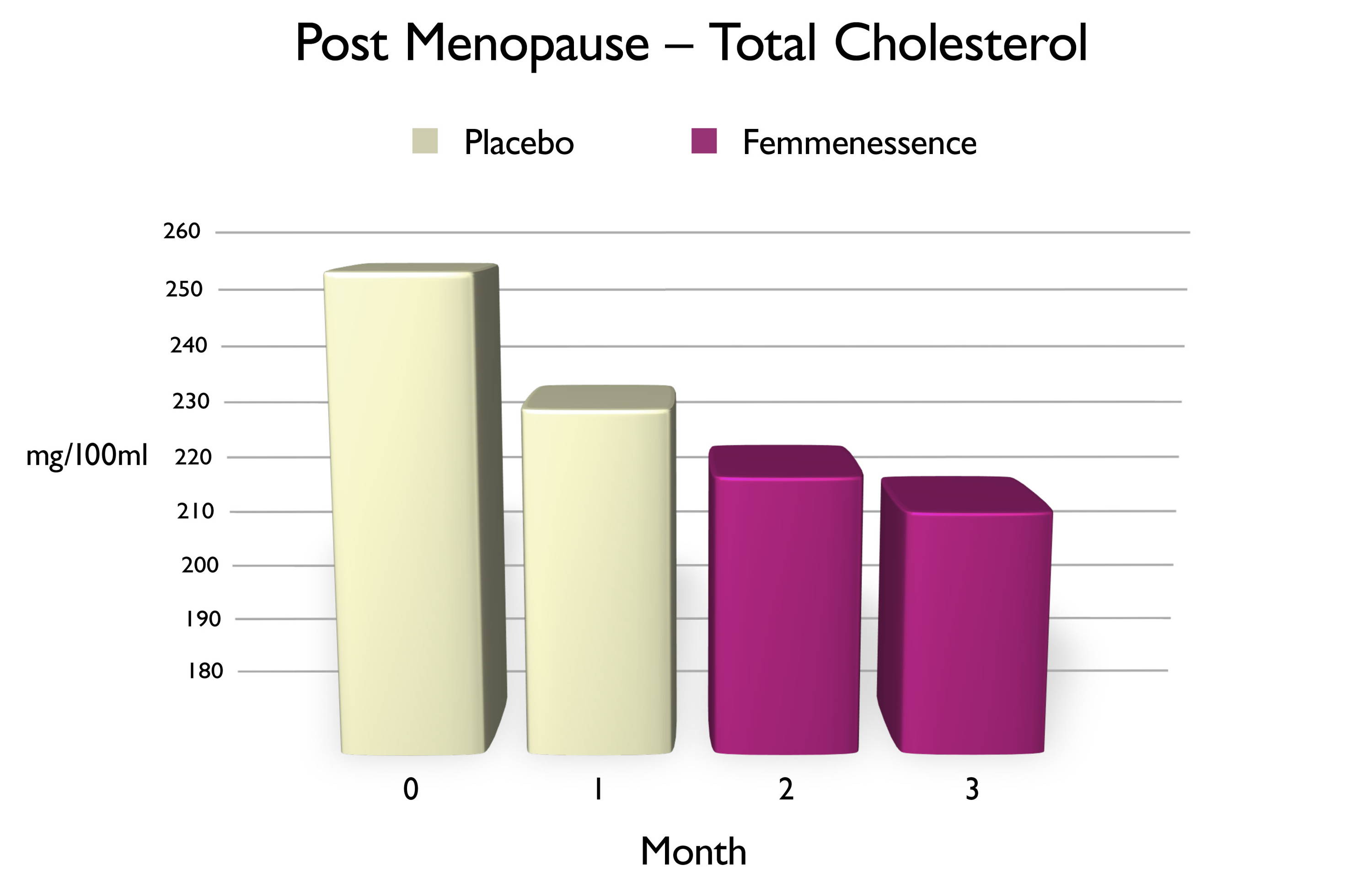 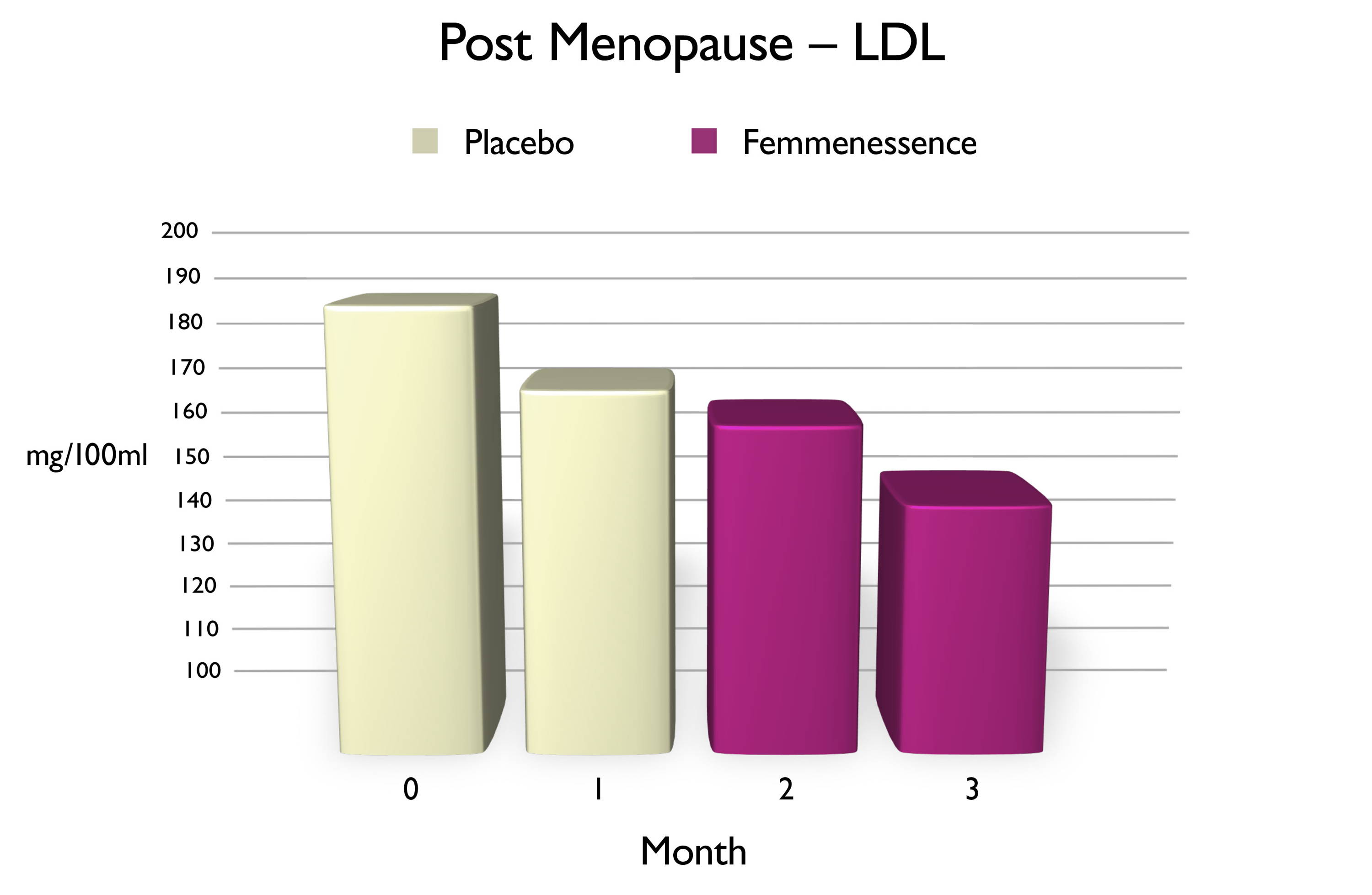 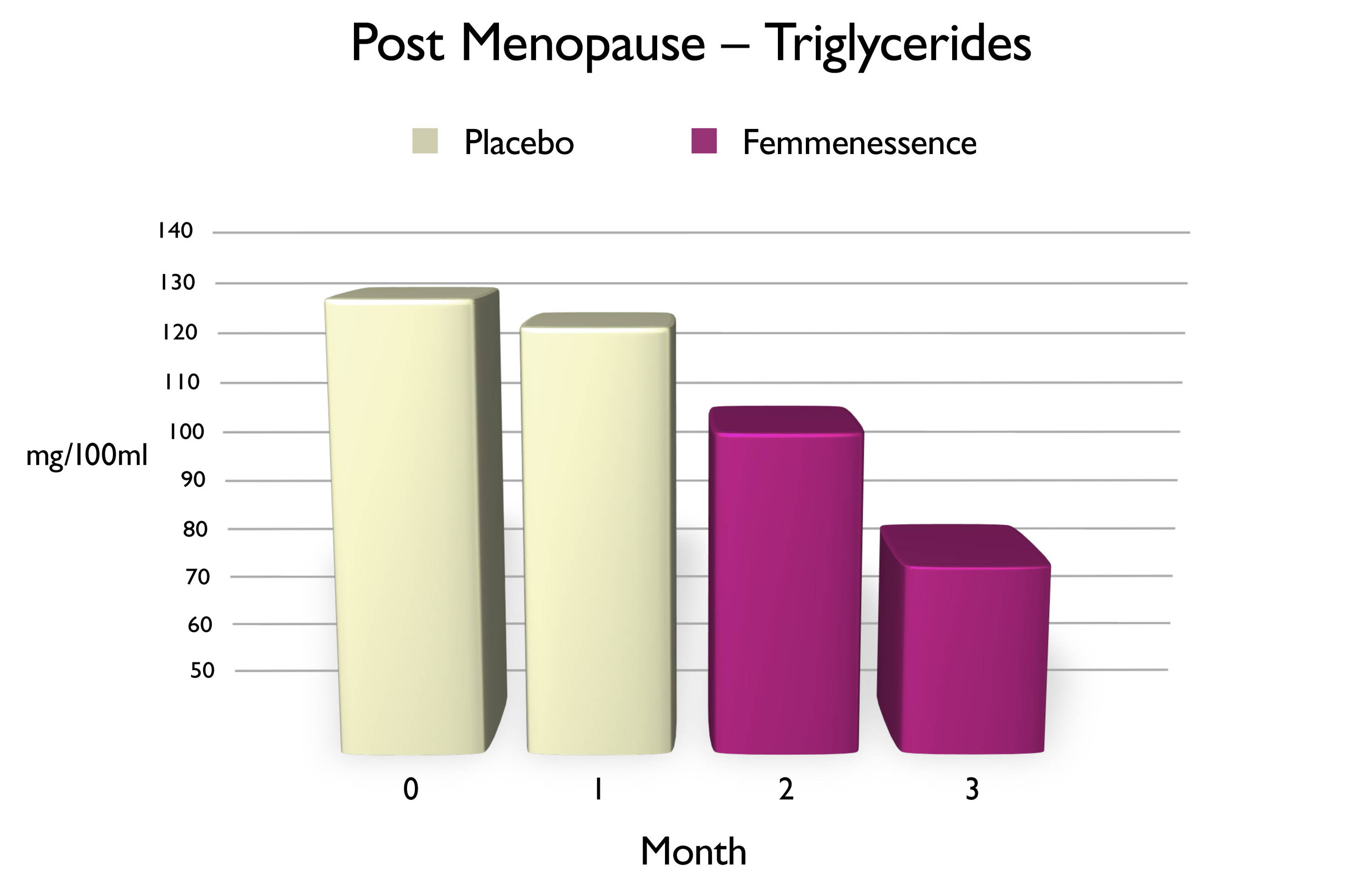 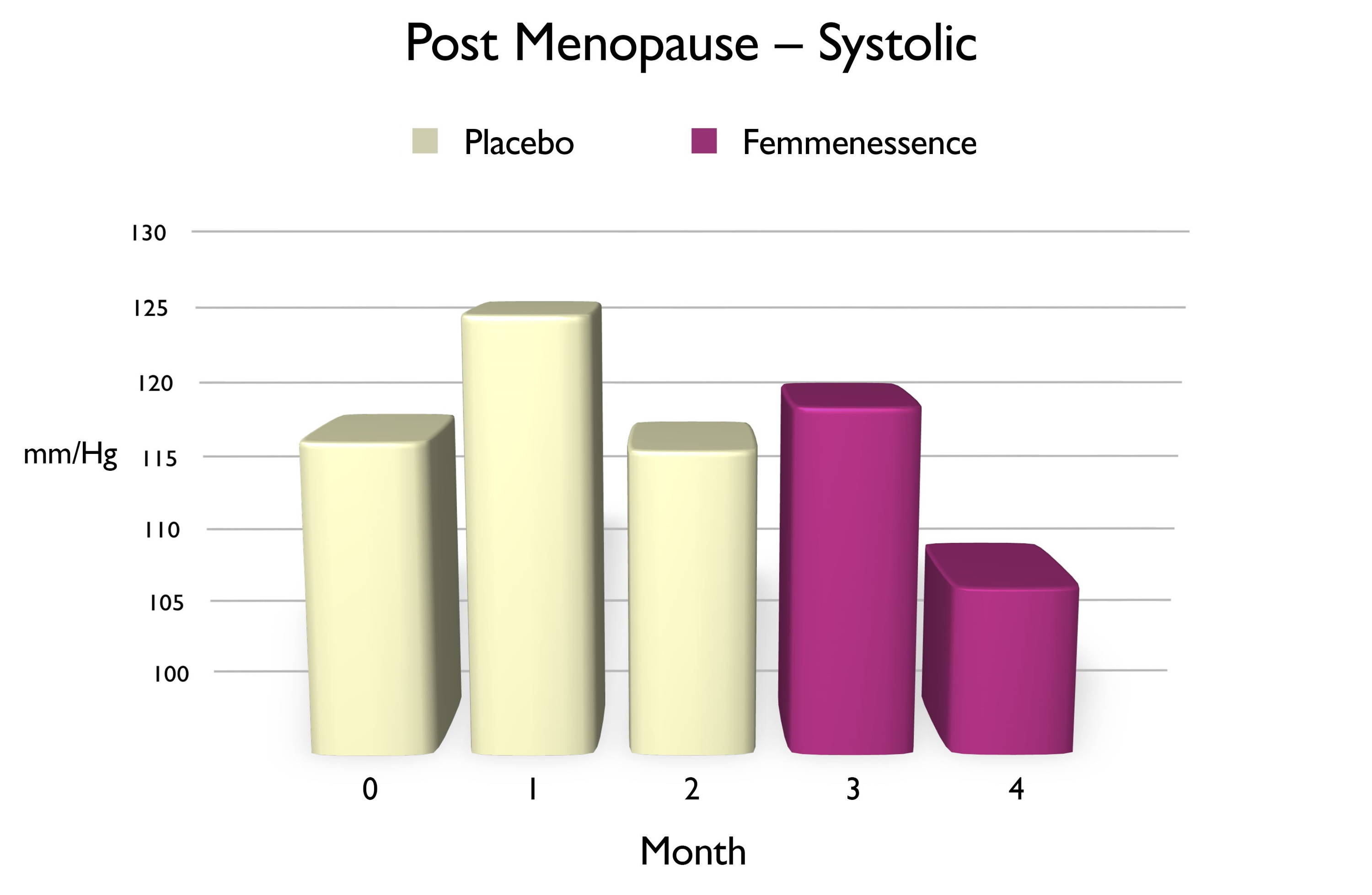 Adrenal Hormones like Cortisol, Testosterone and DHEA affect sleep, energy, libido, muscle growth and weight, all of which relate to heart health. Adrenal fatigue and the biological effects of stress, mediated by hormones produced in the adrenal glands, plays a major role in obesity and its deadly consequences including: inflammation, insulin resistance, hypertension, atherosclerosis and other conditions that together constitute “metabolic syndrome”, all of which further increase cardiovascular health risk.

Thyroid Hormones control how quickly the body burns energy (metabolic rate) and makes proteins, as well as affecting the body’s sensitivity to other hormones and body weight.

Over the last 12 years, our doctors have continued to research Femmenessence and its impact on heart health, seeing improvements in patients around insulin sensitivity, cortisol balance and thyroid hormones. And, while our post menopause clinical trial results were inconclusive around body weight, our peri-menopause results were very powerful, and over the last 12 years we have seen that post menopausal women start to see improvements in body weight after 6-8 weeks, versus the 4-5 weeks that it takes for perimenopausal women to experience improvements. 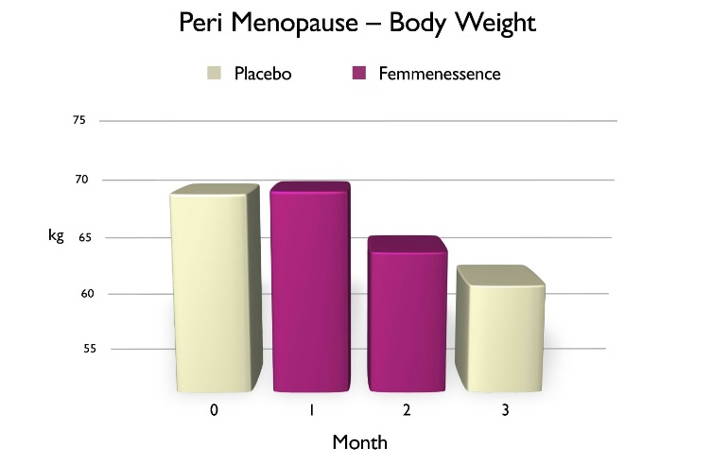 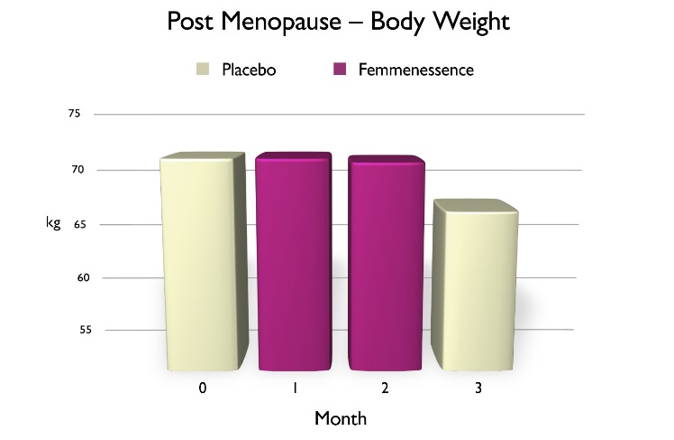 However, while in general hormones are an essential factor around heart health for peri and post-menopausal women, every woman is different and there are many other factors that play a part in your health, from diet and nutrition, to exercise and movement, and all the way through to environment and lifestyle.

With this in mind, our Medical Team have put together a comprehensive Heart Health Guide, going into all of these areas in detail, including a section on the testing you can do to accurately assess your heart status and an expanded section on hormones. 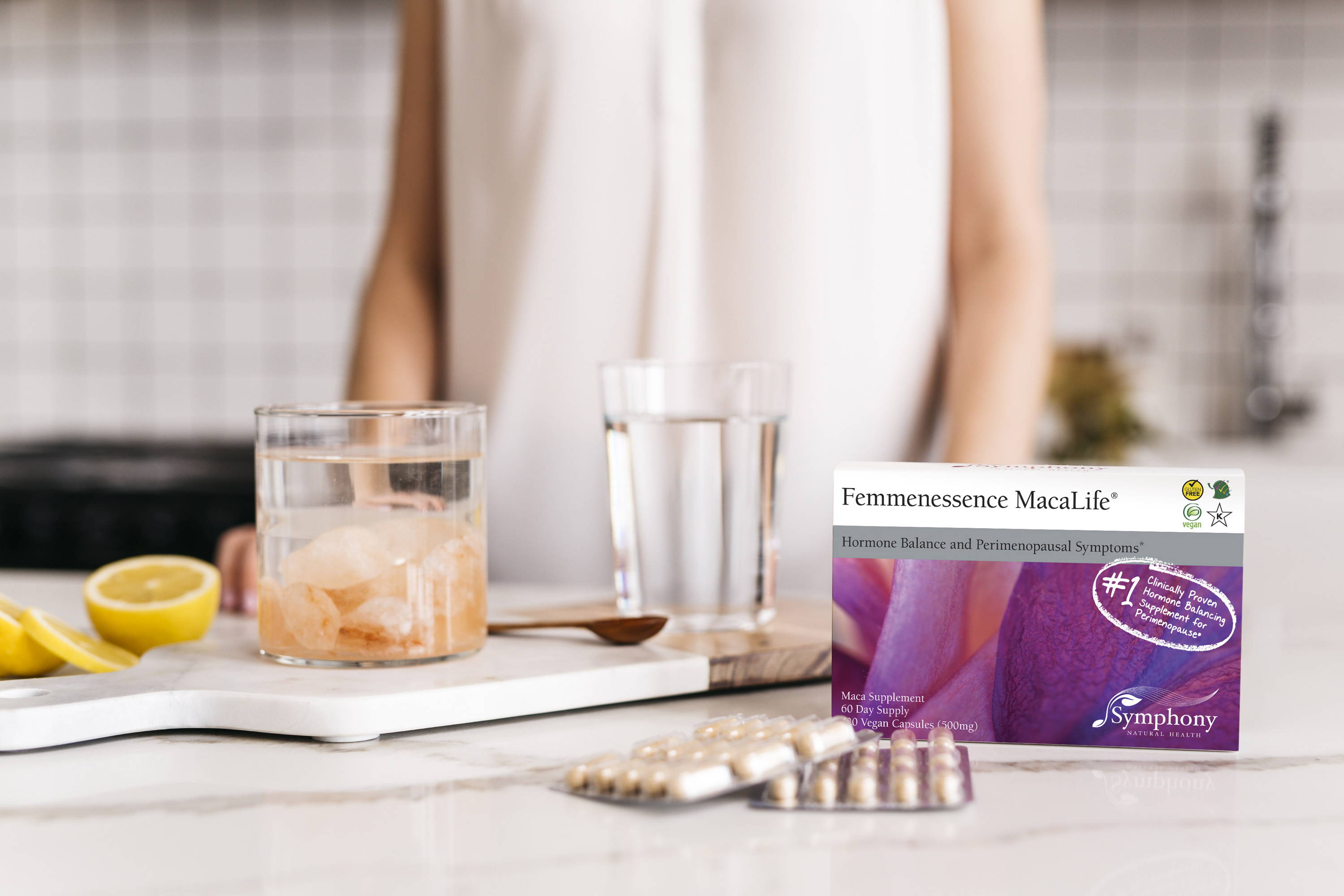 ✓ The reduction of hot flashes and night sweats*

✓ Dryness and lack of desire* 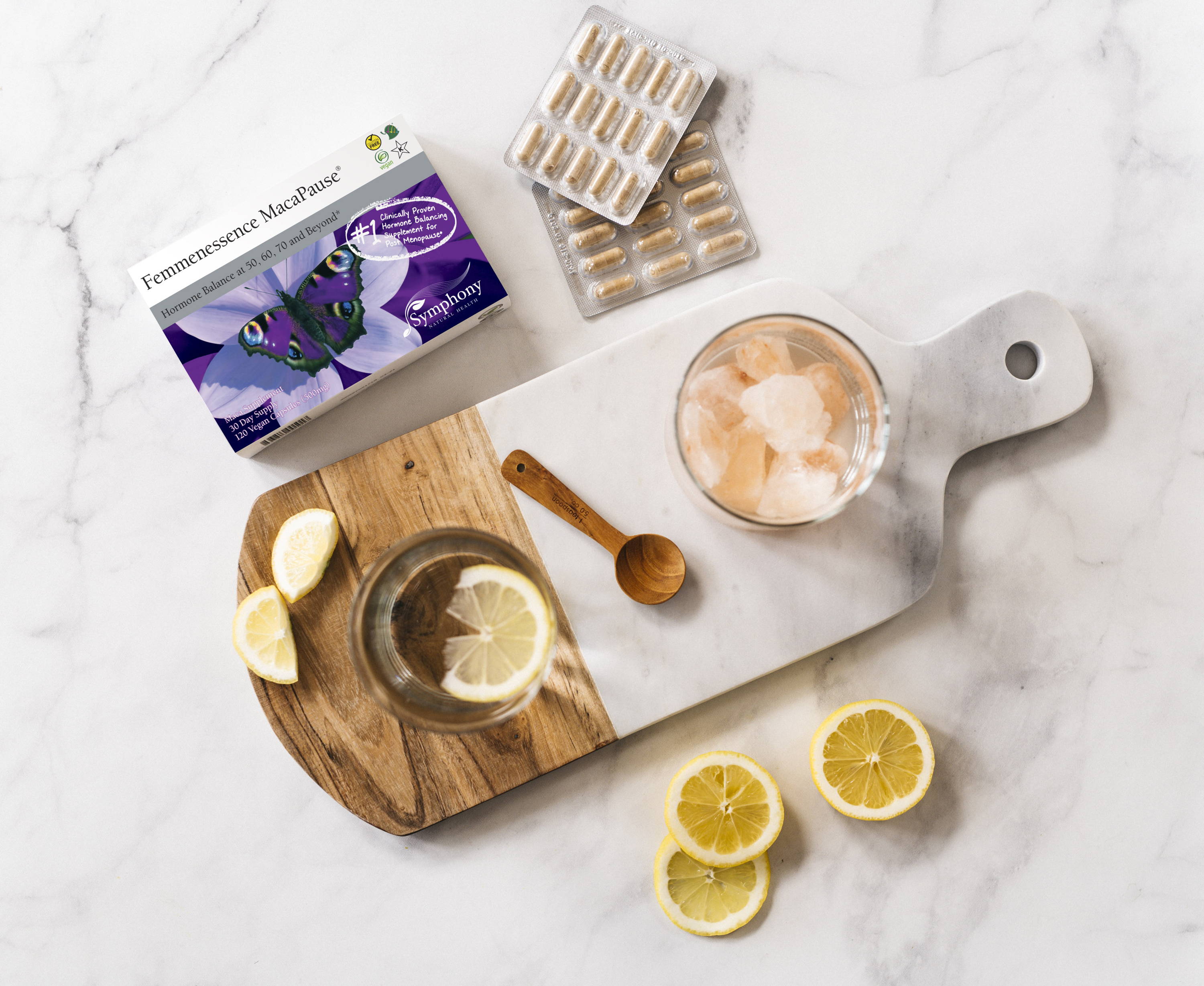 ✓ Your body to help reduce hot flashes and night sweats* 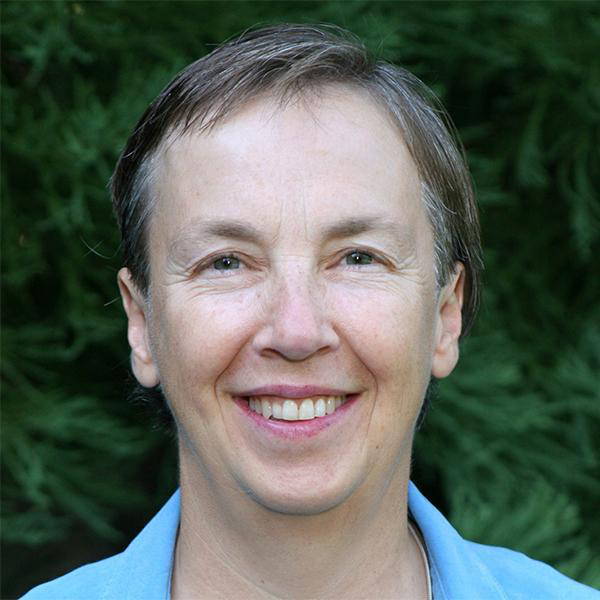 Dr. Tori Hudson is a world renowned Naturopathic Physician with over 30 years of expertise in women’s health, primary care, gynecology and endocrinology.

Since graduating from the National University of Naturopathic Medicine in 1984 Dr. Hudson has been the medical director of her clinic, A Woman’s Time in Portland, OR, as well as the founder and co-director of the nonprofit accredited naturopathic residency program - Naturopathic Education and Research Consortium.