Stage 1 is during the first 25 years of life when you build the strongest, most dense bones and minimize any actions that may compromise bone building. There are three stages of bone health.

Stage 2 is from 26 years of age to menopause, when you take steps to avoid the breakdown of bone.

Stage 3 is during postmenopause, which is generally over 50 years of age, when you support both bone growth and limit bone loss.

Osteoporosis is a chronic, progressive lifestyle disease that affects millions of Americans, particularly women. It is estimated that anywhere between 20%-50% of postmenopausal women are affected by low bone density.1

When most people hear the word disease, they think of a virus or bacteria causing the condition. This is not the case with osteoporosis which is in fact a “lifestyle disease.” The major causes include old age, hereditary bone health, low body weight (<127 lbs), being a current smoker, and being on steroid therapy (e.g. Prednisone).2

Women lose about 50% of their trabecular bone and 30% of their cortical bone over the course of their lives, about half of which is lost during the first 10 years of menopause. 3 During those years, most women are eating the same foods, exercising the same way, and consuming the same amount of calcium, vitamin D, and other vital nutrients. The only major change is that the body’s production of hormones dramatically declines, emphasizing the correlation between hormones and bone density, and that the significant loss of hormones experienced postmenopause directly relates to the initial loss of bone density.

For this reason, hormones are one of the most important, if not THE most important aspect of bone health, particularly growth hormone, estrogen, progesterone, and testosterone. Additionally, often forgotten in bone health protocols is thyroid hormone production, as hyperthyroidism or overproduction inhibits bone building and accelerates bone loss, increasing the risk for osteoporosis.4

Hormone Therapies & Herbal Alternatives: Traditionally, doctors have used Hormone Replacement Therapy (HRT,) which has clearly demonstrated bone density improvements.5 However, concern about the slightly increased risk of breast cancer and stroke and the controversy that remains about the use of HRT has resulted in many women choosing not to take hormones. In order to receive long-term benefits of slowing bone loss and reducing the risk of fractures, hormone therapy of any kind would need to be taken under the current guidelines of using the “appropriate dose, duration, regimen, and route of administration” as determined by the healthcare provider.5 Once HRT is stopped, the woman will lose bone again, as if she is newly menopausal. This has led many integrative practitioners to consider other alternatives.

However, to date, there has been no clinical evidence that products containing black cohosh, red clover, or soy have any effect on hormones in post-menopausal women, although soy research does show a small benefit to bone density. More recently, published clinical research on a concentrated herbal preparation called Maca-GO has been the first to demonstrate statistically significant effects on hormones in postmenopausal women and improve bone density.6,7 Instead of introducing hormones into the body, Maca-GO supports the body’s own production of hormones through the hypothalamic-pituitary-adrenal axis allowing women to use this long-term. 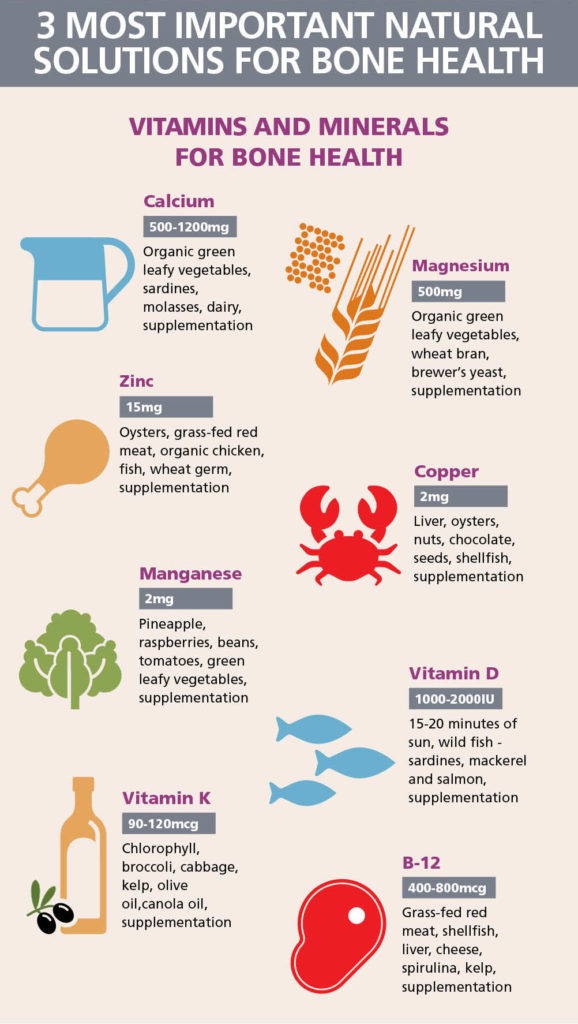 The average American adult falls short in consuming the key vitamins and minerals the body requires to properly function. The Standard American Diet is full of processed foods, sugar, and additives and depleted of quality fats, protein, and carbohydrates, leaving the body struggling to properly regenerate bones and regulate hormones. Women require each of the following vitamins and minerals for bone health. These are the building blocks for bone, while hormones support the building process. Both are required.

(The amounts listed below per day are averages. Individual needs may vary.)

Osteoporosis is a lifestyle disease and the environment we put ourselves in can have a significant impact on our health, positive or negative. These modifiable factors can be improved over time by working on them individually or in conjunction with one another.

Everyone has heard the saying “move it or lose it.” Our society is more sedentary and thus our muscles, bones, and joints have suffered the consequences. Engaging in regular exercise is necessary for all aspects of health, including bone health.

These statements have not been evaluated by the Food and Drug Administration. This product is not intended to diagnose, treat, cure or prevent any disease.